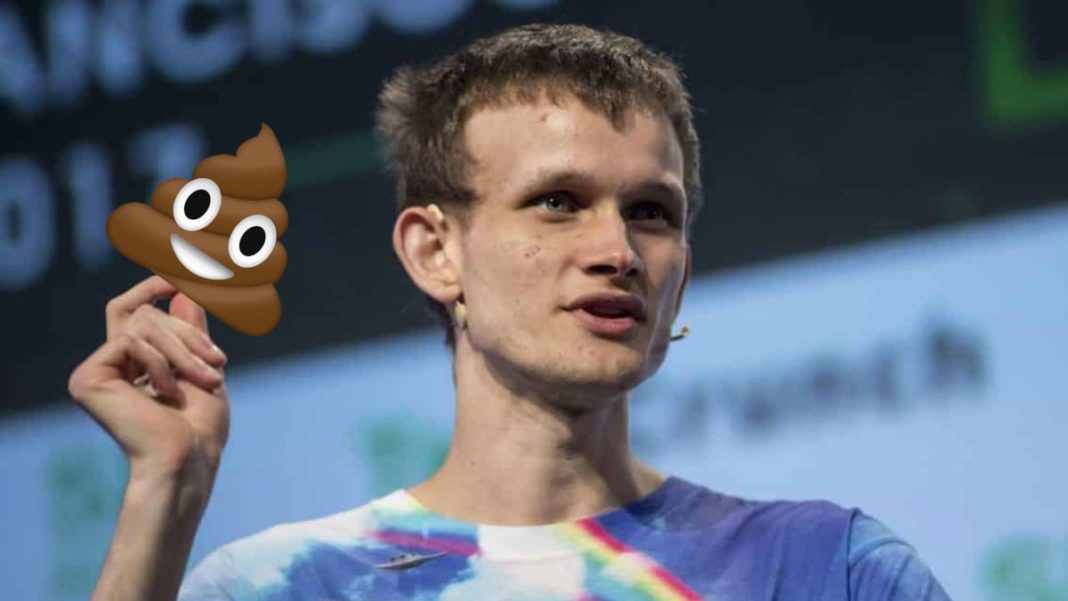 Vitalik Buterin earned over $33,000 from the massive sale of the ShitCoin (SHIT) token he received via airdrop. The dumping of 25 trillion units dropped the asset’s price by more than 60%.

The swap took place at 02:56 am Brasília time (BRT), in two operations of 12.5 trillion SHIT each. Leaving personal account vitalik.eth and going through the decentralized exchange uniswap (UNI).

In the market, many useless coins, created with the sole intention of capturing money from “shitcoins” or unsuspecting investors, are called shitcoins (shit coins*). The reality is that the vast majority of them are scams, or fraudulent financial “schemes”.

In this case, the coin is not only considered a shitcoin, but its anonymous creators made this fact very clear to the entire market, naming it ShitCoin, with the ticker SHIT — which means shit*.

Why did Vitalik have ShitCoin?

You might be wondering what Vitalik Buterin was doing with 25 trillion SHIT tokens in his personal wallet. Is the creator and main developer of Ethereum a shitcoin?

Unfortunately for critics, this is not what seems to have happened.

Vitalik is often the target of unwanted token airdrops being sent to him. A wallet history of his shows receiving trillions of tokens from various projects, starting from the original smart contract, all hoping to capitalize on the founder’s popularity and gain more attention for his project.

The same seems to have happened with the receipt of ShitCoin, a token created 58 days ago, on June 7, 2022.

If he sold, someone else bought

As long as there is demand for “projects without a project”, more and more cases like this recur. If Buterin got more than 20 ETH, someone lost that amount, as SHIT is down more than 64% after the massive dump.

For speculators who are always hunting shitcoins and memecoins, hoping for the next “big pump“, the chance to become the liquidity outflow of “smart money” is quite large. That’s why it’s important to invest in known projects that have real demand for use, solving a specific problem.

The Ethereum founder had previously spoken out about his displeasure at these ‘scam’ tokens that keep popping up on the network, but even more so because they are being sent to his wallet. These tokens sent to him increased significantly after the success of the Shiba Inu (SHIB), giving projects more confidence to send tokens to Buterin.

The SHIB team has sent trillions of tokens to Vitalik in the past — which represented about half of the total supply, worth about $6 billion. He then burned 90% of that amount, donating the rest to charity, and his involvement in this made Shiba Inu very popular.

Since then, many other projects have tried to replicate the scheme. Buterin spoke about these tokens, warning creators to stop sending units to his account.