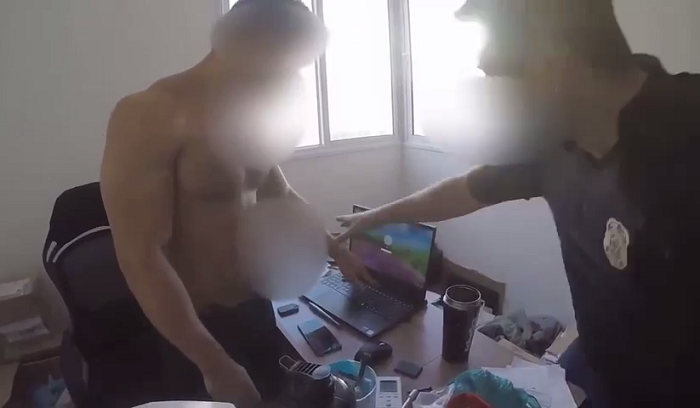 A man had to be immobilized after a failed attempt to turn off a computer during a Federal Police (PF) action at his home earlier this month. "Stopped! I'll erase you here, ”said an agent who held him by the neck. According to the PF, he is among those investigated by Operation Creeper who searches for hackers accused of bank fraud in Espírito Santo.

In the video of the act, the man, who was called “Igor” by one of the agents, was caught in bed, accompanied by a woman. When approached, both did not react. As soon as they were searched, the agents began to carry out one of the 8 search and seizure warrants issued by the courts.

He was handcuffed by the Federal Police

Upon arriving at the office, right there at the residence, the agents asked him to enter the password on a computer that was already on, which he denied and went straight to the hang up button, but had his hands removed by the police force. He was then handcuffed and taken to another room to be questioned.

During Operation Creeper, which counted on the participation of 40 Federal Police officers and occurred simultaneously in the municipalities of Cachoeiro de Itapemirim and Guarapari, in Espírito Santo, and in the city of São Paulo, R $ 7,213,687.00 were seized. The PF did not say whether there was seizure in cryptocurrencies.

One of those investigated is considered one of the most active hackers in Brazil, according to the PF, according to a report produced by the agency with the support of information from the Tentacle Task Force. This, in turn, is a partnership between the federal agency and the Financial Institutions in the fight against bank fraud.

According to the PF note, the investigated will be responsible for the crimes of invasion of the computer device; production of a program for the invasion; theft through fraud; criminal association; concealment of financial transactions; and money laundering.