Home News The cryptocurrencies that invest the most in Brazil 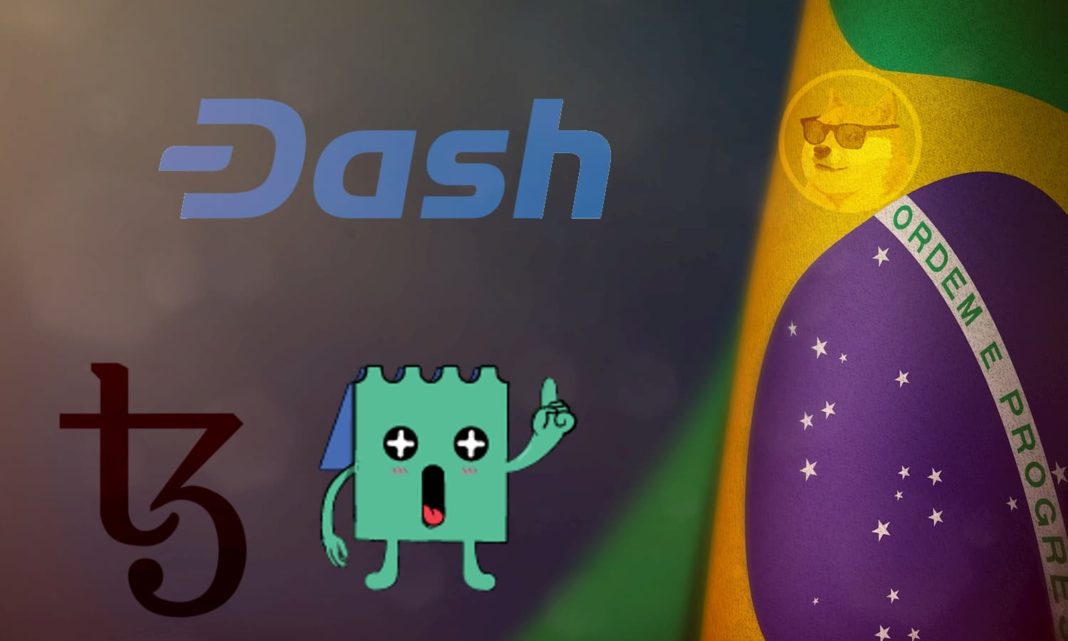 Cryptocurrencies are just protocols, however, some have communities that look better for certain countries and many of them have Brazil as the driving force.

In this post we will see the cryptocurrencies that are investing heavily in Brazil.

Dash – The favorite of Latin America?

The cryptocurrency Dash was very innovative in launching its own financing system, that is, part of the generated coins are distributed to the community and the community.

In this way, DASH members have voice power. And part of these members decided to invest heavily in Brazil and Latin America.

According to data from Dash Ninja, the Dash investment fund has already invested 563 DASH in Brazil, or at today's price R $ 188,577.00. There are even channels that live on Dash in Brazil, like “Rodrigo Digital”.

But Dash is about to lose its post to the next cryptocurrency.

Decred – New in the money, but old in the piece

Decred is a much-loved fork of bitcoin in Brazil, perhaps the most beloved of all Satoshi Nakamoto's currency forks in Brazilian lands.

Decred's Brazilian community is comprised of war veterans in the cryptocurrency market, including Emilio Mann, the mythical Girino Vey, hacker Fernando Guisso ☂️ and many others.

The Brazilian community for many years paid for its own growth and created interesting projects with the cryptocurrency, such as a digital blockchain notary from OriginalMy.

Recently, the Brazilian community obtained an investment of R $ 610 thousand through its governance system, called Politeia. As a result, Decred will be the DAO cryptocurrency that will invest the most in Brazil in 2020.

Nano – Moved by the community

Just like Decred in the past, the Brazilian Nano community supports itself, without a fund received directly from the cryptocurrency.

Despite this, projects involving Nano are growing in the country. Among them we have:

Without a specific fund for marketing, the community lives on donations and spontaneous actions. In Brazil there are more than 13 thousand members, with great engagement in social networks.

While Nano does not have a specific fund, the next cryptocurrency has a block maker here in Brazil.

EOS is a cryptocurrency based on a decentralized computer system. As well? We explained in the post “What is EOS?“.

Although the project is not Brazilian, one of the main miners is from Rio de Janeiro. According to data from LinkedIn, EOS RIO currently has 7 employees who literally work for the protocol.

In March, the EOS developer registered a trademark with the INPI, showing how important the Brazilian market is for cryptocurrency.

With a large staff, meetups and computers producing blocks, EOS is one of the cryptos that most invest in Brazil.

The Tezos project is coming strong in Brazil, in July 2019 they announced a partnership with Banco BTG Pactual, a US $ 1 billion agreement.

Although small, Tezos is coming to Brazil and is certainly one of the main cryptocurrencies that will invest in the country in the coming years.

Soon we will have a review of Tezos on the Cointimes channel on Youtube.

Other cryptocurrencies or companies that do protocol management have also shown up in Brazil, the largest of which is Ripple. As previously published, Ripple (responsible for XRP) opened an office in Brazil.

However, it appears that it is focused on building good relationships with large banks and XRP is just one of several Ripple products.

Despite not being a “cryptocurrency” but a token, the stablecoin CryptoBRL is a Brazilian project that is worth mentioning. Created by a group of companies, the currency is paired 1: 1 with the Real and has grown here.

We did a review of the cBRL on our YouTube channel, it's worth taking a look:

These are some of the projects that have an eye on Brazil, several others were not mentioned, but these are for another post.