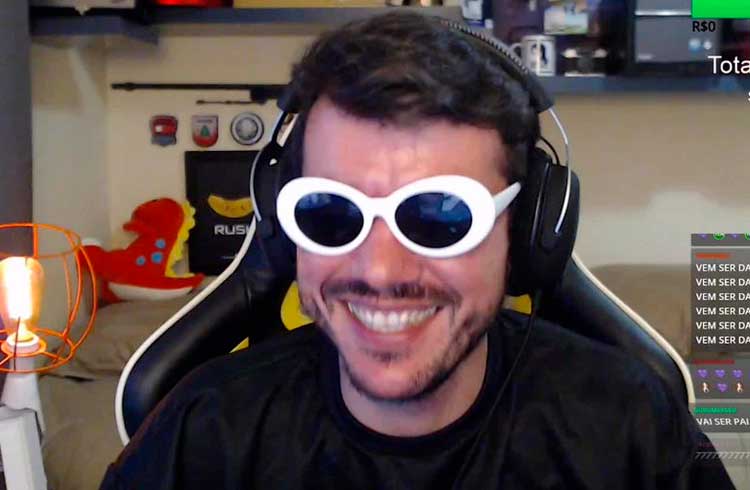 Among Bitcoin (BTC) investors, there are those discreet and those who make a point of speaking. In the case of the streamer known as Gaules, he is part of the first group.

However, during one of his broadcasts, Alexandre Chiqueta commented briefly on having BTC. And, according to him, a “considerable amount”.

Gaules talked about buying an apartment, the value of which was used to acquire the property was obtained by selling BTC when the crypto was worth R $ 60 thousand.

In 2020, the Gaules channel on the Twitch platform was the second most watched in the world. When talking about Bitcoin publicly, the streamer has led to the young audience that it is not wrong to invest in cryptocurrencies.

The Bitcoin issue came up while Gaules was talking about "letting go" of things on Tuesday (12). Although he had a “considerable amount” of BTC, the streamer broke up to buy an apartment.

“The height of the absurdity of the latter for me was as follows: for me to buy the apartment, the apartment we bought, I had to get rid of some Bitcoins. And it was a considerable amount, old.

So imagine that you sell a considerable amount of Bitcoin when it was 60 thousand (reais). Now the stuff is 200 (one thousand reais). In other words, there are people who would look and say: 'our old man, my life is over'. (…) But I look, I can't be sad. (sic) "

The BTC was around R $ 60,000 between August and the end of October 2020. Thus, Gaules narrowly missed the start of the cryptocurrency boom.

After entering the R $ 70 thousand zone in November, BTC started an increase that lasted until the aforementioned R $ 200 thousand by the streamer.

Anyway, as Gaules himself says, he was not sad.

“It was a decision, and the decision was made to buy something. If I bought what I wanted, and I'm following… It's not turning f ** a up on, it's not a priority, it's just getting to know that it can decrease or increase the scale. (…) The person will live a sh * t life because he bought or sold something and lost a little more money. ”

In fact, BTC is unpredictable, and the most recent rise is an event that proves this speech.

Most investors and enthusiasts did not imagine that Bitcoin would reach the price level above $ 40,000.

The example was set while he talked about "skins", which are colors, clothing and custom designs obtainable in online games.

“(…) It's that skins, like this… I know that those who buy expensive clothes also have this, you buy it, you don't use it and you only value it. When you look at skins, think of stocks or cryptocurrencies, or even the dollar, and you can play with them. (sic) "

Although he talked about cryptocurrencies at the time, Gaules had not said he was investing.

Read also: Another billionaire admits to having “significant amount” of Bitcoin