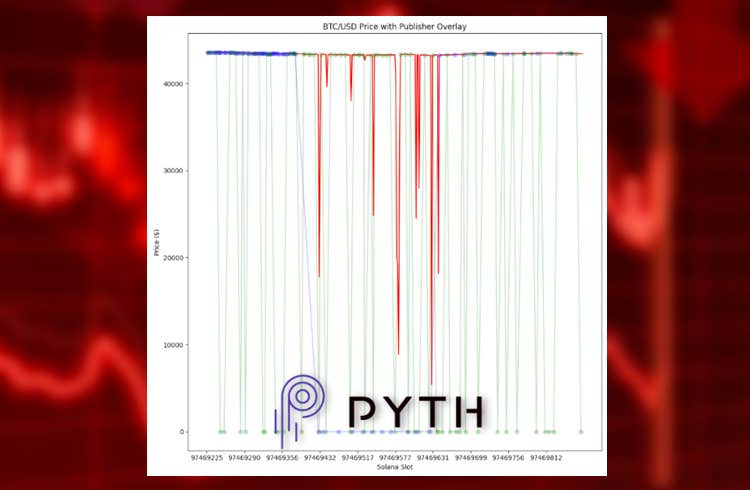 The Pyth Network oracle network had malfunctions on Monday (20). Among the problems, the main one was errors in asset prices.

For example, the oracle reported the price of Bitcoin (BTC) at US$5,402, eight times less than the actual market price. But that wasn’t the only problem. Pyth’s price feed also reported the share price of AMC cinema chain at $772 on September 15th and 17th. However, the actual price did not even reach $50, according to Yahoo Finance data.

Even the price of Dogecoin (DOGE) was in error, with Pyth pointing the cryptocurrency-meme at $0.88 on September 15th. On the same day, DOGE’s market price was just over $0.25.

Pyth is an oracle that seeks to bring together traditional finance and blockchain-based applications. With recent failures, the service broke one of the main rules of the market: never release wrong data on asset prices.

Subscribe to The Defiant to stay up to date with the best news about DeFi:

Unlike services like CoinGecko, developers use Pyth’s data to price smart contracts in real time. It receives pricing data from companies such as exchange FTX and the trading platform. market maker Virtu Financial. Then Pyth uses its own software to show asset prices to traders and developers. The process takes place in real time.

Therefore, the price feed can trigger actions in decentralized finance (DeFi) applications, ie settlements. With wrong prices, investors run the risk of losing their guarantees and being liquidated. Naturally, Pyth’s mistakes have driven many traders crazy.

“Stellar work – your faulty oracle feed liquidated my position in Mango Markets. But none of you are going to take fiscal responsibility now, are you?”, complained the Trade Daddy user on Twitter.

The fiasco comes less than a month after Pyth was launched on Solana’s main network (SOL) with the explicit goal of bringing reliable data on-chain in milliseconds. Their offerings rightly include cryptocurrencies and traditional assets such as BTC and AMC shares.

A Pyth representative declined to comment. On Wednesday (22), the company published an analysis recognizing the pricing problems and explaining their causes.

“Several Solana programs that rely on Pyth prices were affected by this incident. The impact has been exacerbated by some programs relying on price aggregator feed without using trust,” the report said.

Pyth said its developers are making changes to avoid pricing errors in the future. There will be a testing protocol so that companies supplying data to the network can see how their data will be processed before sending it out as a final product.