Home News Ripple 100% Green thanks to this investment of $ 44 Million? 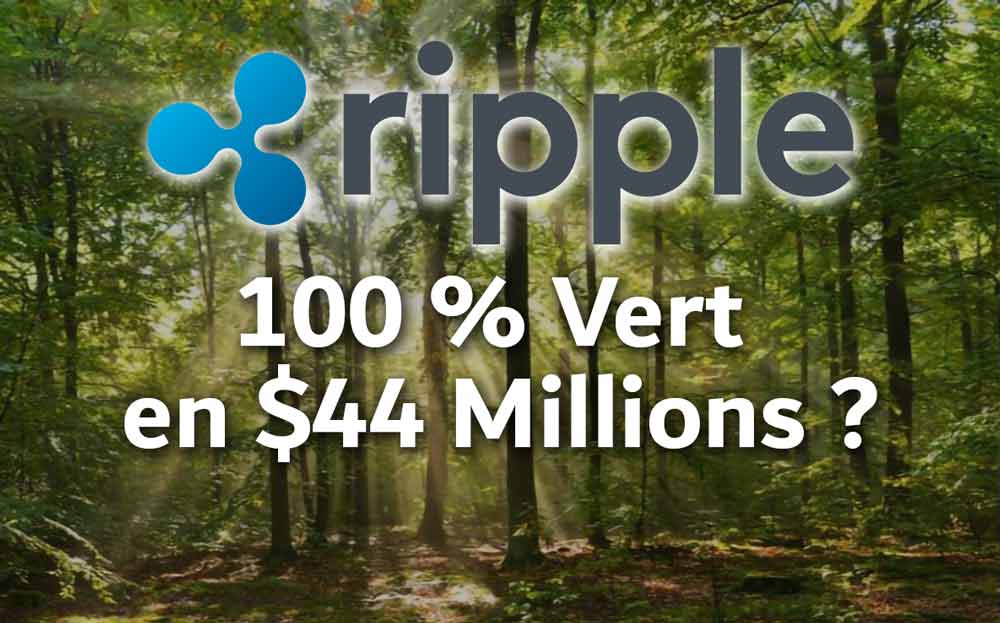 Can cryptocurrencies be positive for the environment? That’s what Ken Weber, Head of Social Impact at Ripple XRP, wants to believe. In a statement, the latter affirmed his company’s commitments to the environment. Commitments now concrete thanks to an investment of 44 million in solar energy.

While his trial with the SEC continues to last, and that Coinbase and Binance will soon be on the dock, Ripple is already starting the rest of his journey. And to ensure the sustainability of his business, Brad Garlinghouse thinks about sustainable development. Just to forget the judge.

The environment is a sensitive subject when it comes to cryptocurrencies. This point was raised by well-known billionaires. Elon Musk had suspended payment for his Tesla in Bitcoins BTC because of the environmental impact.

Since then, a mini revolution has taken place in the world of cryptocurrencies:

And then there is Ripple.

The quest for carbon neutrality

Ripple operates on a network distributed among different nodes. These nodes validate the transactions with the Ripple protocol. It’s not exactly cryptocurrency mining, but it’s an energy-consuming activity. So to reduce the energy impact of its corner XRP on the planet, the company decided to take a serious look at the issue of the environment.

Already in April, Ripple was pioneering by joining the Crypto Climate Accord. By his side, industry giants such as Consensys and CoinShares

And that was only the beginning. To make a real difference, a $ 44 million partnership has been made with the company Nelnet. This American company was originally in the US student loan business, then branched out into solar energy.

For Ken Weber, Social Impact Manager at Ripple, investing in ecology is a priority. Indeed, the latter considers that the future of the world will pass through fast, secure and decentralized technologies. In other words by the blockchain and cryptocurrencies. It is therefore their duty to think about the ecological impact now.

Because without this planetary and environmental dimension, cryptocurrencies will remain a gadget for a few geek spread around the globe. To seriously consider that all transactions in the world go through electronic means, it is vital to take into account energy consumption and environmental impact.

“Securing a clean energy future is a top priority across all sectors, not only to spur future economic growth, but also to ensure a more sustainable world.” explains Ken Weber. “As the adoption of cryptocurrencies and blockchain continues to grow, it is evident that this technology will be the foundation of our future financial systems.”

With this first investment, Ripple hopes to offset at least 1.5 million biometric tonnes of CO2.

For more information – see our guide “Buy on eToro“.

The other ecological ideas of cryptocurrencies

Other projects are emerging in recent times to make the blockchain industry greener.

Canada Computational Unlimited – CCU.ai, a Canadian mining company made a remarkable IPO for its 100% green offer. Indeed, it is the first company of its kind to use only renewable energies to power its graphics cards and its minings rigs. The source of energy? Mostly hydraulic dams.

In addition, the Chinese mining ban has prompted players to seek other facilities. To gain access to cheap electricity, many of them also went to dams and solar installations. China was one of the biggest polluters in mining. Yet many Chinese facilities also used hydropower. But the large variations between wet and dry periods forced mining centers to use coal-fired power plants half the time.

Finally, an essential point that deserves to be addressed. The big problem with energy is that it’s hard to store. For example, when electricity from a dam is not used, it is lost. The same goes for wind turbines. If it uses this energy, mining cryptocurrency technically does not consume anything, since it consumes the leftovers. However, for a company needing to ensure a fixed and regular income, we cannot wait for there to be leftovers to be put in their mouths.

But for a hydraulic installation, the establishment of ancillary mining rigs that would come into operation at certain times could both recover lost energy, generate gains, and play a role in the decentralized payment system. The future and development of cryptocurrencies and technology will no doubt open the doors to mixed solutions like this.

Cryptocurrencies and blockchains are therefore still far from being green. However, far from wanting to do greenwashing, real projects are emerging to provide concrete solutions to this problem. Because it’s not just a question of image. For those who firmly believe in the crypto and decentralized future, independence and energy sustainability are the pillars of that freedom.