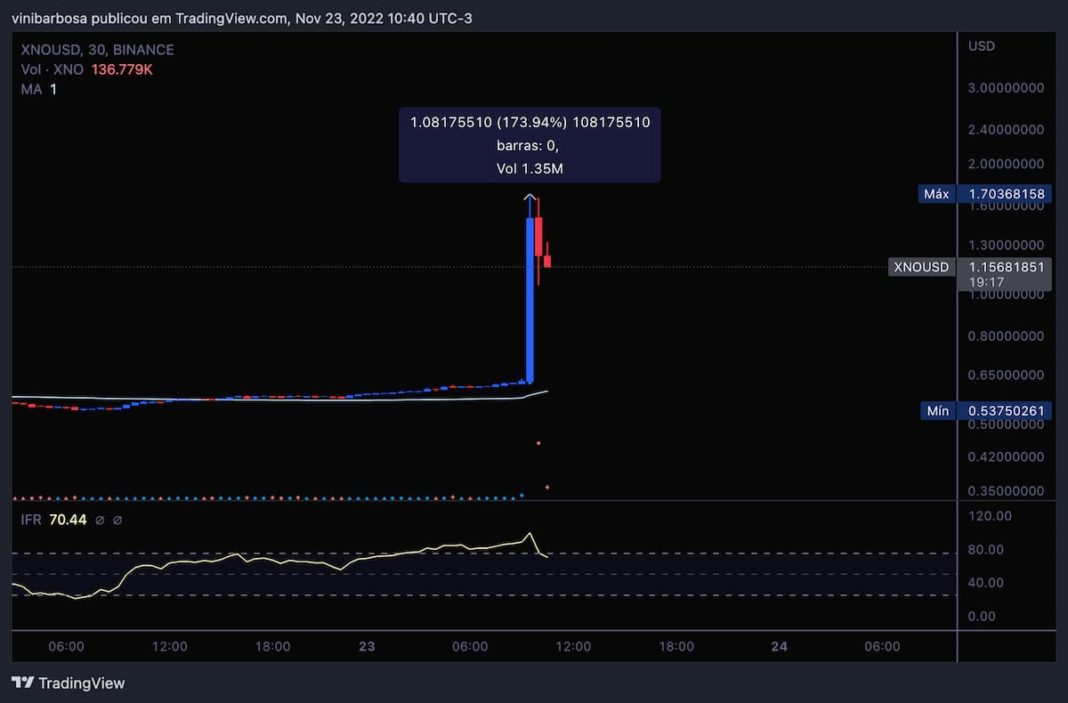 The nano cryptocurrency is up more than 170% on Binance this morning and many are wondering what prompted the price “Pump”.

First of all, you have to understand that nano (XNO) is a lowcap coin, meaning it has a low market capitalization and therefore significant price swings are more common as a smaller amount of capital needs to come in or out to affect its unit price.

At the time of writing this article, nano is ranked #164 by market capitalization on Coingecko, which means an increase of 80 positions in a few minutes, considering that I observed a ranking of #244 at 10:01 am this Wednesday ( 23).

Looking at its fundamentals, there are many analysts and enthusiasts who believe that XNO still has a long way to climb the rankings and Coingecko’s internal scoring and ranking system – which analyzes community data, coin tokenomics and other fundamental issues – puts nano in position number #33, as I published on the Cointimes Discord, on October 28th.

In a quick calculation, XNO at position #33 in the current market would put it in place of Filecoin (FIL), according to The Coin Perspective. With a unit price of $10.66, that would mean a 795% move from the current price, at $1.19.

Another important point, in addition to market capitalization, is volume.

Assets with low volume (low liquidity) tend to make aggressive price movements (up or down) when this volume increases sharply. When considering that XNO’s trading volume has been below $1M for the past few days, it’s only natural to see a relevant increase in price volatility as seen this morning.

Litecoin, Dash and a Standard Among BTC Competitors

It was not just the nano cryptocurrency that took off from Tuesday to Wednesday. Litecoin (LTC) rose more than 25% this morning and Dash saw an increase of more than 50% in just a few minutes.

Know more: Litecoin takes off against Bitcoin; What happened?

This indicates a greater market demand for coins whose proposal is to be peer-to-peer decentralized money with greater on-chain scalability than the Bitcoin (BTC).

Recognizing this pattern, the recent pump did not go unnoticed for lack of warning, as technical analyst and trader 0xStacker posted a tweet at 02:26 am on Wednesday demonstrating that LTC price rallies are directly correlated with XNO rallies .

“You know what you like to “pump” after LTC? XNO.”

No sooner said than done.

“Nano has potential” in the eyes of whales

For some time I have been observing a movement of some of the most relevant players turning their eyes in a positive way towards nano. On my Twitter (@vinibarbosabr) I have the opportunity to interact with some of them, while sharing this kind of growing attention with my followers.

On November 16, Razer CEO Min-Liang Tan responded to a tweet saying he saw “a lot of potential” in the nano underpinnings, but saying the lack of adoption and use cases is an issue.

The tweet replies include several examples of current use cases such as:

Coincidentally, or not, a few hours before the “pump” that occurred on Binance, Binance’s nano node went offline. Which meant that withdrawal and deposit operations were blocked during the night.

In this way, when the pump occurred, the market was unable to arbitrage XNO between exchanges – buying cheap on one, to sell more expensive on another, thanks to the price difference.

By following nano for a few years, I was able to observe a pattern of behavior in these price pumps in moments of high accumulation and withdrawals from exchanges. Yesterday, on the 22nd of November, we saw more than ⅙ of all nano units move from Binance wallets to private wallets. What preceded the node crash, the lockout of withdrawal and deposit operations and the price pump.

In this way, the price rose more aggressively on Binance, while the other exchanges followed the movement more timidly. This event created an opportunity for those who had nano deposited in the CZ company.

Arbitrage appears to be normalized at this point, with XNO trading with little price difference across major markets.