Home News How a group of Brazilians sent Bitcoin to the Moon via amateur... 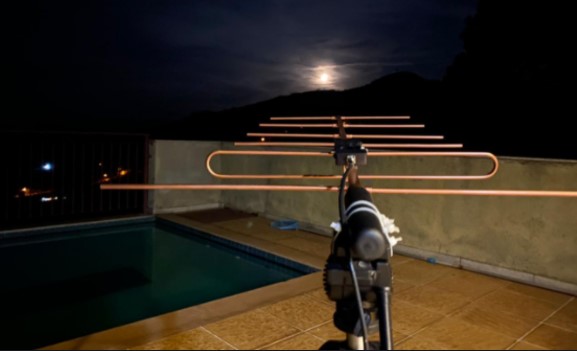 On the night of April 29, blockchain developer Márcio Gandra was on the porch of his home in Macacos, Minas Gerais, surrounded by radio paraphernalia, a large antenna and a mission in his head: send bitcoin to the moon before Elon Musk.

In the sky, the Pink Moon phenomenon happened, a time of the year when the natural satellite is closer to Earth, ideal for crazy experiments like the one Gandra was trying to perform with four friends: Paulo Bezerra, Rafael Silveira, Narcélio Filho and André Alvarenga, cryptocurrency and amateur radio enthusiasts just like him.

The idea was for Narcélio to receive R$50 in bitcoin from the P2P André Alvarenga through a multi-signature transaction (multisig), which needed to be validated by two other participants who were 800 km away from each other. The detail is that this transaction would be sent between these signatories with the help of Lua.

Rafael was the first signatory and was with Márcio at the time of the experiment. By the conventional way, the el received and signed the transaction. Then he would have to send it to Paulo who was in Marília, São Paulo, and would be responsible for the second signature. It is from there that the experiment begins, as this transaction would reflect on lunar ground before being received by Paulo.

To bring bitcoin to the moon, they used a technique that emerged with the British military in the 1940s known as Earth-Moon-Earth (EME) communication, in which a transmitter propagated radio waves to the moon that , then reflects the sound back to Earth and can be received by anyone.

Thus, it was necessary to convert the transaction data into morse code. To do this, they downloaded the Electrum wallet transaction file in PSBT format — meaning partially signed bitcoin transaction — where the encrypted data was in hexadecimal (letters and numbers). This data was then converted to binary (0 and 1) and finally to morse code.

That night in Marília, Paulo also aimed his antenna at the moon and was in constant contact with Márcio through WhatsApp to set the correct frequency to receive the morse code. As the code was transmitted, it decoded the message back to hexadecimal with the help of a mobile app.

Márcio told the Bitcoin Portal that the transmission was complicated, because the Moon was constantly moving in the sky and the whole process was done in an analog way.

“We chopped up the transmission in parts because every time we got a signal, some time passed, the moon moved and we lost again. Then it all started all over again. The important thing is that the process was validated”, he said.

The process took about 25 minutes. When Paulo finally had the complete message in hand, he reconstructed the PSBT file of the transaction and climbed into his Electrum wallet to make the second signature.

This transaction, the one that went through the Moon, was the first contact that Paulo had with bitcoin. In Marília he works in the electronic security field, but he has been an amateur radio enthusiast since he was 16 years old.

“It was a super cool and new experience, there are people who try and can't, but ours worked. Before that I had never dealt with bitcoin either, but I've wanted to get in for a while, but I didn't know much about it," he explains.

Finally, the transaction was validated on the blockchain and in Belo Horizonte, Narcélio Filho received the bitcoins in the wallet. “This experiment reproduced what Satoshi called the 'special, magical property of bitcoin', that of being money that can be transported in any communication channel”, celebrated the miner.

elon, we did it first

To carry out this experiment, Márcio Gandra took three months to prepare the equipment and run tests that often failed until everything worked. For him, all the work was worth it.

“Having made bitcoin play on lunar soil is a very strong sense of presence and it means a lot. You can tell this ten years from now to others in a way that is still very relevant to freedom,” he said.

In another message sent that day, they transmitted the following message to the star in English: “I am the first bitcoin to reach the moon. We did it first Elon :)”.

The idea came after the billionaire businessman said he wanted to send Dogecoin to the satellite. “At that time the heart beat faster, the adrenaline grew and it became an obsession for the last 3 months. We proved that you don't need any multi-billion dollar rocket to send cryptocurrency there”, joked the Brazilian.

He also thinks radio is a medium resistant to censorship. Even if the internet is blocked in one region, or censored by the government, it would still be possible to communicate and even send bitcoin over amateur radio.

With this idea in mind, Márcio created the non-profit project called Satoshi.Radio.Br, which intends to function as an interconnected network of “listeners” and “broadcasters” for transactions.

“All amateur radio, tuned to a specific frequency, would be there in listen mode. Upon detecting a transaction coming in, it could replicate it on the network. Suppose you are without internet, but with a radio, you can send the transaction on that frequency knowing that there will be someone on the other side to replicate your request on the network”.

For this to work, every city in Brazil would have to have at least one amateur radio responsible for this mission. “It's challenging and exciting, but mostly necessary,” he concluded.