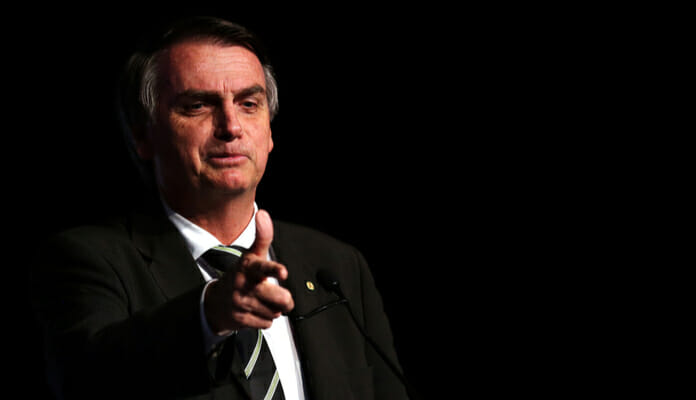 A report published in 2018 by the news site O Antagonista was cause for confusion on Thursday (28) between the media outlet and the president of Brazil.

Jair Bolsonaro called the site a source of Fake News, accused him of insider trading on the Stock Exchange and said that the Brazilian Securities and Exchange Commission (CVM) should pay attention to the site's performance.

Bolsonaro, during a live broadcast on Thursday (28), picked up a news item from the website O Antagonista to give as an example of Fake News. The article entitled “Haddad spreads fake news:‘ Folha proves that Bolsonaro created a criminal organization ’” was attacked by the president.

The president then stated that the communication vehicle had lost a great collaborator and that before it "leaked" some information, but that from now on "the filet mignon no longer leaks".

At 28 minutes and 25 seconds, Bolsonaro made serious accusations against “O Antagonista” as if some of his news were produced to manipulate the stock exchange:

“Funny, a bomb goes out on the Antagonist, the bag moves, okay ?. CVM sees this business there, is that right? CVM analyzes who acted in a non-standard way, ok? So many times these fake news stories ‘on purpose’ are passed on by those interested in something, okay? But it's alright."

The fact, however, is that there was confusion about Bolsonaro's interpretation of the text. The president only stuck to the excerpt “Folha proves that Bolsonaro created a criminal organization”, but did not mention the rest of the article that actually attacked the PT candidate.

The article published on October 18, 2018 attacked by the President was actually a conversation between Fernando Haddad (presidential candidate at that time) to Clóvis Monteiro from Rádio Tupi (RJ). Haddad therefore mentioned a Folha story as proof that Bolsonaro would be the person behind the so-called fake news industry.

Contrary to what Bolsonaro understood, the article in “O Antagonista” attacked Folha and Haddad and not the current president:

“Folha's original story,‘ Companies are shooting messages against the PT on social media ’, does not prove that Bolsonaro created a criminal organization, nor does it even point to direct and personal action by the PSL presidential candidate in the reported episode.”

The Antagonist strikes back

In response to Bolsonaro's attacks, “O Antagonista” published a few hours after the video a report to clarify the confusion committed by the president In the text entitled “Bolsonaro, the captain of fake news”, the website stated:

"Contrary to what the President of the Republic suggests, the news in question is not fake news, but a finding that Fernando Haddad's campaign was spreading fake news against Bolsonaro himself in the campaign."

The article, however, can bring new confusions. The website stated that the president has been practicing slander and spreading false news which has made him the target of investigation:

"By spreading slanders like this on the national network, the president acts as the true commander of the machine for spreading fake news and destroying reputations that yesterday was the target of the Federal Police."

Rodrigo Constantino next to Bolsonaro

The president's live resonated on social networks. Economist and journalist Rodrigo Constantino, who calls himself “liberal with a conservative bias”, came out in defense of Jair Bolsonaro, on your Twitter, at the exact moment when the live was running.

“Bolsonaro now on‘ live ’saying that The Antagonist has lost his main source in the government, and that he planted lies that mess with the stock exchanges, warning that the CVM exists to investigate these things. Did the tapirs feel hot there ?! ”.

Constantino even published a video excerpt with the following message: “Are you all right, Antas?”

The journalist's post received several comments. One of them even associating the image of the news site O Antagonista to the company Empiricus.

Constantino's publication was Retweeted by Tiago Guitián Reis, founder of Suno Research. Reis only stated that “you have to investigate this from there”. Once again, there was another flood of comments and the association between Empiricus and O Antagonista was one of the most debated topics among the posts.

No response from CVM

O Bitcoin Portal he approached the Securities and Exchange Commission to ask about an ongoing investigation against the website O Antagonista, but until the publication of this report he had no answer.