Home News Bitcoin, cryptocurrencies and blockchain are topics of ‘Conversation with Bial’ on Rede... 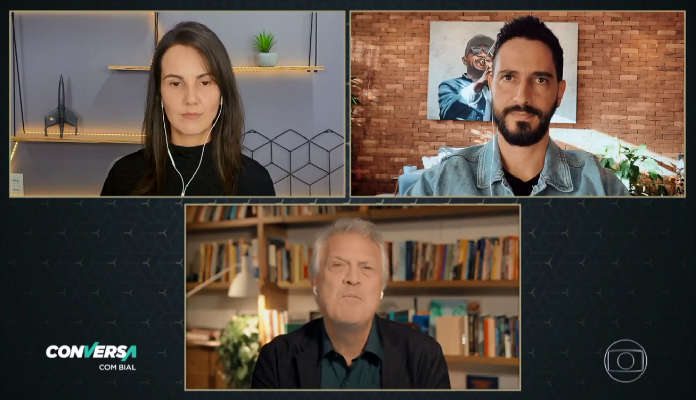 The ‘Conversation with Bial’, a daily talk show by Rede Globo presented by journalist Pedro Bial, had a theme on Wednesday night (27) the Digital Economy, based on Bitcoin, cryptocurrencies and Blockchain technology. To comment on the new market and how it works, the program invited lawyer and technology expert Ronaldo Lemos and financial educator Carol Souza.

Bial opened the talk show talking about blockchain, what he called "a kind of super virtual notary", responsible for a new universe of online businesses, "including a vast offer of virtual currencies". Then he asked Lemos to explain his premise better – at the beginning of the program, Bial had said that “the digital economy is more or less what we have always done, only in digital environments”.

"That's it, only at an even greater depth and speed," said Ronaldo, explaining that this digital movement is dematerializing the idea of ​​money, taking it to an even greater level. He added:

“The arrival of Bitcoin, virtual currencies, everything that is happening today – including several countries launching their virtual currencies – is indicating that there is an ongoing revolution in terms of how we store and transfer value. And this is what I find impressive. ”

He also explained about tokenization and the functioning of Blockchain technology, emphasizing data security and its immutability when inserted into the network. As for bitcoin, Ronaldo stressed its decentralized distribution and summed up: "To take down bitcoin and other currencies you would have to take down the internet as a whole".

In turn, Carol Souza, co-founder of the UseCripto project, a financial education channel, dealt with the immateriality of cryptocurrencies, described earlier by Bial as “somewhat abstract”.

“It took us a long time to understand it (the technology of cryptocurrencies). Today we have everything in the palm of our hand, we have a radio, a TV, a DVD, we have libraries from all over the world. So we had to abstract all of that to get to the cell phone as it is today ”, explained Carol.

Comparing physical money with virtual money, the financial educator said: “Money is also something that was very palpable before – we took notes, credit cards… – and now, with cryptocurrencies, we have managed to dematerialize all of this, as Ronaldo said ”.

Bitcoin is not just that, Carol continued. It is not just money, it is not just an asset. It is three things: a cryptocurrency, a store of value and a medium of exchange – and perhaps in the future a unit of measurement. But it is also a network that is decentralized and that is all over the world, without borders. And it's a record system, he said, adding:

“It's like an Excel spreadsheet, that every little bit is distributed around the world and that everyone has access to this“ ultra-transparent ”and“ immutable ”data.

Bial then spoke about the backing of traditional currencies over time, such as the US dollar, for example, which in the past was backed by gold, but which today is the basis of trust.

Asked about the backing of Bitcoin, Carol replied: “It is precisely this immutable network. So we are sure that nothing will be changed ”. So, she said, Bitcoin is an extremely trustworthy asset – "and trust is value".

She also compared Bitcoin to gold, stressing that everyone trusts it because it is durable, scarce, divisible and verifiable. "Bitcoin can replicate this digitally," he concluded.

At a certain point in the program, an excerpt from a 2011 report on Bitcoin by Ronaldo Lemos was shown. At the time, 1 BTC was trading at around $ 7. The old images caused participants to laugh. We read then lamented: “Do you know how many bitcoins I bought (at the time)? Zero! I didn't buy any Bial ”.

“Do you give this news and don't buy any?” Joked Bial, to which Lemos replied, still smiling: “I thought it was very expensive”.

In the end, the guests answered questions about the use of cryptocurrencies for illicit purposes, their price volatility and the new craze called ‘crypto art’, which are digital files transformed into non-fungible tokens (NFT).

Ronaldo explained that bitcoin, for example, although it works on an anonymous network, it is fully traceable and, therefore, in one way or another one can reach the criminal. But he warned, without naming names, for some cryptocurrencies focused exclusively on privacy, which could be used for illicit purposes.

Regarding the price fluctuations of cryptocurrencies, Carol said that if the person is not organized and prepared to deal with volatility he may be at risk.

Regarding the NFTs, she said that it is a way for the artist who cannot communicate with his audience to exhibit his art. Ronaldo added that it is also a way to create a shortage of a work in the digital world.

Check out the program in full: