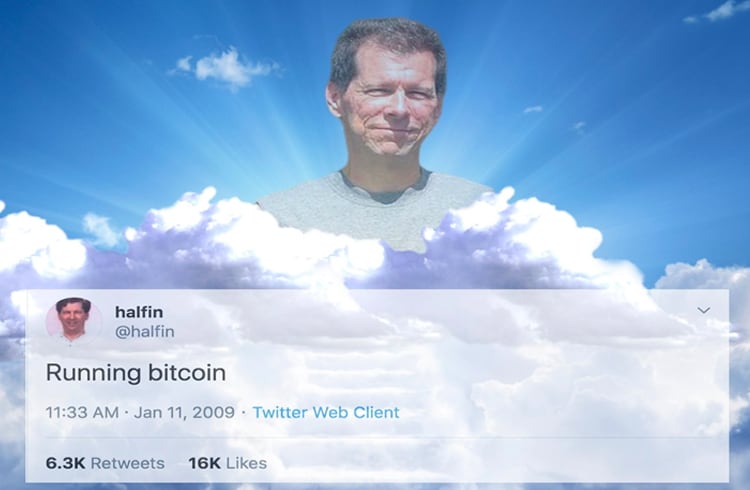 Among the many historical dates for Bitcoin, January 11 was the most recent to remember. On this day, 11 years ago, computer scientist Hal Finney announced the execution of a complete Bitcoin node on his Twitter. With the message “Running Bitcoin” (running Bitcoin), Finney would go down in history.

However, another landmark date was March 19, 2013. That date, through a post on the Bitcointalk forum, Finney published an exciting account called “Bitcoin and me“In which he told his story about Bitcoin and revealed to everyone that he had Amyotrophic Lateral Sclerosis (ALS), a disease that would take his life a little over a year after posting.

This was the last post from the man who became known for receiving the first Bitcoin transaction in history and was in direct contact with Satoshi Nakamoto, to the point of being considered by many to be the true creator of Bitcoin. Therefore, we decided to honor him again and bring the full report translated. So check out Hal Finney's touching story below.

I thought about writing about the last four years, a defining moment for Bitcoin and me.

For those who don't know me, I'm Hal Finney. I started work on encryption in an early version of PGP, working closely with Phil Zimmermann. When Phil decided to start PGP Corporation, I was one of the first hires. I worked at PGP until my retirement. At the same time, I got involved with the Cypherpunks. I performed the first anonymous encryption-based repost among other activities.

Fast forward to the end of 2008 and the announcement of Bitcoin. I noticed that cryptography veterans (I was about 50) tend to be cynical. I was more idealistic; I have always loved her cryptography, mystery and paradox.

When Satoshi announced Bitcoin on the encryption mailing list, he received a skeptical reception at best. Cryptographers have seen many grand schemes made by clueless novices. They tend to have an instinctive reaction.

I was more positive. I've been interested in cryptographic payment schemes for a long time. In addition, I was fortunate enough to meet and correspond extensively with Wei Dai and Nick Szabo, recognized for having created ideas that would be realized with Bitcoin. I had tried to create my own proof-of-work currency called RPOW. So I found Bitcoin fascinating.

When Satoshi announced the first release of the software, I caught it immediately. I think I was the first person besides Satoshi to run Bitcoin. I mined block 70 and so on and was the recipient of the first Bitcoin transaction, when Satoshi sent me ten bitcoins as a test. I had an email conversation with him over the next few days, mostly reporting bugs that were fixed by him.

Today, Satoshi's true identity has become a mystery. But at the time, I thought I was dealing with a young man of Japanese descent who was very intelligent and sincere. I've been lucky enough to meet many brilliant people throughout my life, so I recognize the signs.

After a few days, Bitcoin was working quite stably, so I left it working. In those days, the difficulty was 1 and it was possible to find blocks with a CPU – not even needed a GPU. I will mine several blocks in the coming days. But I turned off the software because it made my computer heat up and the fan noise bothered me. In retrospect, I wish I had continued longer, but on the other hand, I was extremely lucky to be there at the beginning. It's one of those half full and half empty things.

I heard about Bitcoin again in late 2010, when I was surprised to find that it was not only still working, but bitcoins really had monetary value. I dusted off my old wallet and was relieved to find that my bitcoins were still there. As the price went up, I transferred the coins to an offline wallet, where I hope they have some value to my heirs.

Speaking of heirs, I was surprised in 2009 when I was suddenly diagnosed with a fatal disease. I was in the best shape of my life earlier that year, I lost a lot of weight and started running. I ran several half marathons and was starting to train for a full marathon. I ran over 20 miles, and thought it was all set. That's when it all went wrong.

My body started to fail. My speech started to curl, I lost strength in my hands and my legs took a long time to recover. In August 2009, I was diagnosed with Amyotrophic Lateral Sclerosis (ALS), also called Lou Gehrig's disease, in honor of the famous baseball player who received it.

ALS is a disease that kills motor neurons, which transmit signals from the brain to the muscles. It causes weakness first and then gradual paralysis, usually fatal within 2 to 5 years. My symptoms were mild at first and I continued to work, but problems with my voice and fatigue made me stop in early 2011. Since then, the disease has continued its inexorable progression.

Today I am essentially paralyzed. I receive food through one tube, and my breathing is conducted through another tube. I operate the computer using a commercial eye tracking system. He also has a speech synthesizer, so that's my voice now. I spend all day in my electric wheelchair. I created an interface using an arduino to be able to adjust the position of my wheelchair using the eyes.

It was a severe adjustment, but my life is not so bad. I can still read, listen to music, watch TV and movies. I recently discovered that I can write code. In this I am very slow, probably 50 times slower than I was before. But I still love programming and that gives me a goal. I am currently working on something suggested by Mike Hearn, using the security features of modern processors designed to support Trusted Computing to strengthen Bitcoin portfolios. It is almost ready for launch. I just have to do the documentation.

And of course Bitcoin price variations are fun for me. I have the skin in the game. But I got my bitcoins by luck, with little credit for me. I survived the 2011 break. So I've seen it before. As the price goes down, so does it.

This is my story. I'm very lucky overall. Even with ALS, my life is very rewarding. But my life expectancy is limited. These discussions about how to inherit your bitcoins are, to me, more than an academic interest. My bitcoins are stored in our safe and my son and daughter are technology experts. I think they are safe enough. I am comfortable with my legacy.