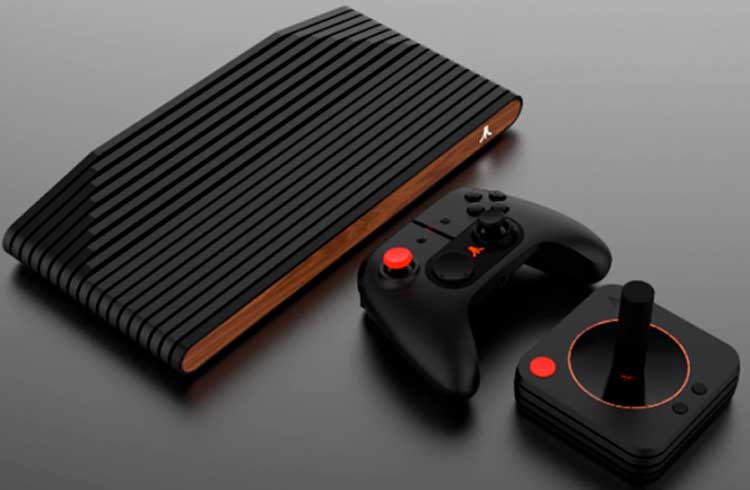 Atari will return to producing video games after a hiatus of more than 20 years.

However, in addition to the console, the novelty is the integration of the device with the Atari Token, which has just ended its pre-sale phase.

Thus, the company plans to encourage video game users to spend cryptocurrencies during the gaming period.

Atari VCS will be integrated with the company's ERC-20 token

Atari VCS is the new video game that will be sold by the legendary company in the field of virtual games:

Despite being a “retro” console, the device will have internet access and integration with Atari's decentralized token.

For this reason, players will be able to buy and spend the tokens in the Atari online store.

The company's long-term goal is to create a means of payment for the video game industry:

“Atari Token is a cryptocurrency built using Ethereum's ERC-20 protocol. Its first objective is to become a means of payment in the interactive entertainment industry, but we believe that the token will also benefit other industries.

Eventually, we see the token available worldwide as a means of payment. It has many uses, such as facilitating smart contracts and protecting the monetization of ‘assets’ purchased in games. ”

The public sale of Atari tokens will be made on Bitcoin.com from October 29th. However, the price of the token has not yet been released by the company.

Atari was one of the leaders in the virtual entertainment industry between the 1970s and 1980s.

However, a set of internal and external factors culminated in the gradual loss of its market share in the gaming industry.

Today, with just 20 employees, Atari is trying to reinvent itself without competing directly with Sony and Microsoft.

So, while these companies are betting on the latest technology for the launch of the Xbox Series X / S and Playstation 5, Atari tries to win over the nostalgic fans of its brand.

According to the company, the Atari VCS will run several classic games and new ones, which were not disclosed. The product can also be used in “PC mode”, which will work as a computer with Windows 10.

The price of the console is US $ 400. In direct conversion, this value is equivalent to R $ 2,255. However, it is likely that the video game will cost more than that in Brazil, should it be imported.

Read also: Ethereum is about to fire, points out famous Binance trader

Also read: Cryptocurrency wallets: check out the best options to use safely

Read also: Day trade is compared to cocaine in an article on activity risks