Home Reviews Get to know “Plutonium”, the launch pad that adapts to your needs 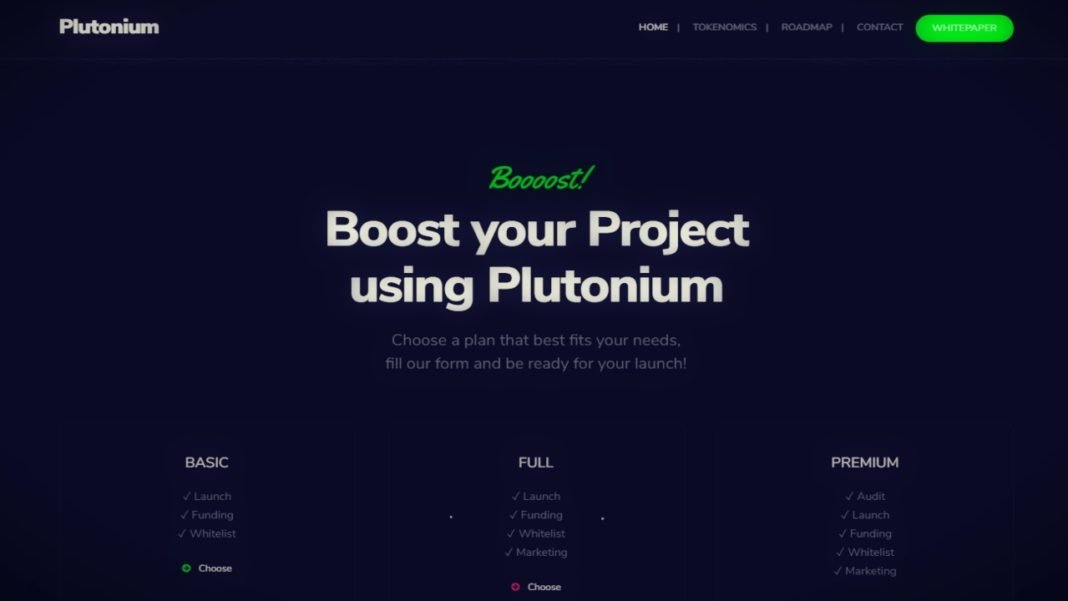 With the concept in mind of creating a blockchain platform that adapts to the needs of customers or users and not the other way around, Plutonium appears on the market.

This next-generation multi-chain launch platform will offer plan systems across all chains based on the Ethereum cryptocurrency (ETH, BSC, SOL, MATIC, etc.).

In search of leadership

Plutonium’s goal is clear and concrete: to become the leader in multi-chain decentralized financing, offering its clients the most complete services at a competitive price, as well as giving a fair chance in all launches made on the platform.

The first one is focused on clients, facilitating their launch and offering different service plans, such as ICF, IDO, liquidity closing and airdrops, to satisfy clients’ needs, since all projects vary from one case to another.

In the second option, a solution is offered that incentivizes and rewards token holders in an intuitive and easy-to-use way; it is yes, democratically: all with the same possibilities.

To achieve this, three different storage levels were planned, thus guaranteeing all participants a place in the early investor period.

In the case of Plutonium Pad, it is aimed at a customer base interested in new token opportunities mainly focused on their development stages and with decentralized financing.

The platform also aims to provide its services to credible and concrete projects with a competent team as secure support.

The process for approving this type of funding for early stage projects is quite strict.

With this, any type of scam is avoided and the correct use of the funds raised through this financing is guaranteed.

The funds for these stages will come from the team’s wallet and funds raised through the lottery. To do this, a percentage of the total supply must be provided.

Once the financed project is already on the market, the tokens received in exchange for the financing will be distributed via airdrop among the interested parties.

This, in addition to respecting the following percentages:

For its part, the financing lottery, in addition to acting as a regular game or raffle, becomes a tool to finance approved projects interested in the financing stage of the ICF.

Tickets for the lottery will cost 10 BUSD (or its equivalent in $ PLUM) and all basic users will be able to participate.

Plutonium stakers will receive a discount based on their rank and will be able to purchase as many tickets as they like.

There will be three winners who will receive the prize money (50% of the total amount) and will be distributed as follows:

For a project to be approved by the Initial Offer in DEX (IDO), the following steps will be required:

1) Approval of Plutonium under these rules or requirements:

2) Approval of 20% of Plutonium stakers:

The IDOs will be carried out in two stages and you can choose the token in which funds will be raised between BNB, BUSD and PLUM.

The first stage called “early investors” will be exclusive for Plutonium stakers, who register in the calendar of upcoming events.

As a step prior to the first round of investors, your project will be announced in the calendar of upcoming events, this is where Plutonium users will be able to make an informed decision about their participation in upcoming projects.

On the other hand, if they are interested they will be added to the participation list with the click of a button (the button will be activated approaching the IDO date).

In the second stage called “pre-sale”, all unsold tokens, if any remain, will be added to this stage, in which anyone, including non-interested and early investors, will be able to participate.

Since basic users can buy less than Plutonium stakers, who can buy different amounts, depending on their ranges, then the token creators will define the purchase amount during this stage.

The pre-sale purchase window will open at the same time for everyone, regardless of whether they are stakers or basic users.

The round will be open until all tokens are sold (or the time limit is reached).

From the client side, they will have three different launch plans.

In order to give investors and clients a sense of security, Plutonium will have a blocking system for both the liquidity of the projects and the unused team tokens, in this way people can see that the liquidity It has been removed permanently or for a specified period of time.

Also, if teams want to lock team tokens to give their buyers a greater sense of security, this will also be possible with the Plutonium lock.

In IDO, liquidity is required to be locked in for a minimum of three months.

In the event that the lockout period established during the IDO on the platform ends and customers decide to lock it again, this will be possible using the services provided by Plutonium Lock.

For those clients who did not make their IDO with the platform, but need their liquidity or equipment tokens to be blocked for a certain amount of time, they can do so using the blocking services that will also come with a blocking certificate to prove it.

There will be three different lock plans depending on the PLUM tokens each locked.

The plan will generate a different token. The generated tokens have no monetary value and are only used to identify the investor’s rights to the IDO. These pools will work for 7 days.

After seven days, the lock will end and the generated token will be burned.

If users decide to participate in the new group, they will have to re-stake their tokens.

The lock works in cycles to give new users the opportunity to participate in the benefits that come with it.

Automated renewal will be implemented to avoid manual blocking.

Airdrops are one of the most useful tools when it comes to projects in the crypto space, they can be used in a variety of cases, such as sending gift tokens, for marketing purposes, or even to make multiple payments at once.

With the airdrop service, you will be able to send up to 100 units of different tokens to as many wallets as needed. This can vary depending on your range of stakers.

For those not participating in the Plutonium stake, they will be able to send tokens to up to 50 wallet addresses and up to 25 different token increments.

If you are a Plutonium staker, you will be able to send the following amounts based on your rank:

To make things as seamless as possible when it comes to Plutonium Pad development, participation system, marketing, coding, etc., the team released $ PLUM, a BEP-20 token.

The asset will be the token used within the platform’s ecosystem, as well as being an option when it comes time to raise funds for projects in the IDO stage.

The users of the platform must maintain and bet the token to access all the benefits that come with being a staker.

Koins, the first NFT game that combines play and earn with a transmedia experience

Vire.Finance: the DeFi protocol of the Waves ecosystem with which you can change your future